First Monday after break. Coming in hot. Made some questionable life decisions this weekend but I am eating fried chicken in my bed and I am ready to face reality. The fact that I have no sheets on my bed is only a minor setback. I slept on my bare mattress last night because it’s laundry day and I’m not adult enough to own multiple sheet sets.

So I went out on Friday with Roomie and all her college friends, who are absolutely wonderful and always treat me as one of their own. I don’t often drink myself into oblivion but they had the genius idea of going to a BYOB Thai Restaurant, where I proceeded to order only an appetizer and drink two bottles of prosecco.

After this, we went dancing. After two more vodka sodas I grew overemotional about the beauty of the music and was placed in a cab. Upon my arrival home, I made the intelligent decision to strip down to my underwear and draw all over myself with magic markers. 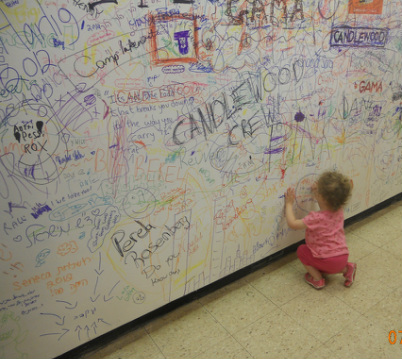 Just like this except I’m 24 and decided to use my own body as a canvas.

Being teachers, we have markers all over our apartment. It’s an occupational hazard. By the time Roomie came to take the markers away, I had covered my forearms with…

At this moment, one of my cuter exes texts me. Let’s make his blog name…Cam. He’s a cameraman for a TV show. Adorably scruffy blonde hipster. I stopped calling him back when I got serious with Sam, but then immediately started drunk texting him the second Sam and I broke up. Ain’t that always the play?

So, despite everything, Cam wanted to catch up. I was into this idea but also had a magic marker giraffe drawn on my arm. I leaped gazellelike into the shower (an impressive feat after laying on the floor and demanding snacks for the better part of an hour) and began scrubbing my artwork off.

Anyway, Cam ended up staying over. He (tactfully) did not comment on my technicolor arms (but that does not mean he did not notice). The Cat did not like him any more than she liked the last boy, and yowled piteously at my bedside all night, inspiring Cam to ask me how much longer she is supposed to live.

Not having any sheets on my bed last night means I have clean sheets tonight and it is miraculous. I have suffered and am now in the promised land. I even shaved my legs just for my clean sheets. Ladies out there will back me up on this one: there is no better feeling than clean sheets and shaved legs. It’s like a big silky cloud. Chances of me getting up for work on time tomorrow are officially slim to none.