First day back at work after vacation. Teaching middle school is somehow even more exhausting when I am supposedly well rested from a two week vacation.

I spent most of my planning periods daydreaming about my upcoming trip to South Beach. I was supposed to go to Costa Rica with Sam in February, but then when we broke up of course I had to plan some stellar vacation that same week to show him that I don’t need him and all that jazz. Whatever. Going to the beach with my best girl friends will be way better. I can drink margaritas and hit on cute boys with reckless abandon.

The fact that he’s not going to Costa Rica anymore doesn’t hurt either. Have fun sitting in freezing New York in February, loser.

After work today my work husband asked me the age-old question “Nap or Gym?” (At least it is age-old when you have been work spouses as long as we have). Having turned over a new leaf of not napping (did I include that leaf in the original resolutions? Should have done) I told him I wasn’t going to do either. It’s my first work day of the new year. No gym. I’m pacing myself. Besides, I spent at least 20 minutes trying to corral Alberto into his homeroom, and that’s some pretty intense cardio.

Must also find a way to get cat to stop scratching the shit out of my door frame when I’m at work.

One unfortunate thing about me is I cannot cook a thing without having some sort of kitchen disaster. Isn’t there a saying about people who can’t even boil an egg? It sounds vaguely familiar, but maybe that is just because a few weeks ago I tried to hard boil a dozen eggs. I put them on the stove, promptly forgot, and was reminded about them an hour later when all the water had boiled away and the eggs were exploding all over the inside of the pan.

As a result of this, my hilarious Roomie got me some sort of idiot-proof egg cooker for Christmas. 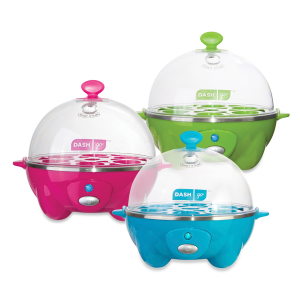 I am about to attempt to boil eggs. She is safely away getting her nails done but I am carefully reading the entire instruction booklet nonetheless. I have to puncture each of the eggs with a sharp spike and place them in the cooker with the required amount of water. There are all sorts of accessories.

Eggs are bubbling merrily away inside my little pot of “impossible to fuck up” and The Cat is gazing reproachfully at the steam coming out of the hole. I should mention that the egg cooker is on the floor of my bedroom because we only have two outlets in our tiny NYC kitchen and they were both in use.

That’s a somewhat odd smell. Is it supposed to smell like this?

I don’t even have to turn this thing off. It has a SENSOR.

New lows: I have just realized I am using an egg cooker to get out of grading my students’ unit exams.

Eggs appear to be fine. No explosions, at any rate, but one very startled cat. I’ll chalk it up as a win.

Well, last night was interesting. I had a boy over. The first since Sam in October. Once you’ve caught your breath, we can move on.

After Roomie got back, we went out to meet one of our friends, who was hanging out with her big brother for the night. He was nice and hilariously funny and spoke Swedish (I should say I’m a total sucker for the whole blonde haired blue eyed Nordic thing). We started out by drinking Aquavit, which is some strange Scandinavian grain liquor, and it spiraled downhill from there for everyone but this guy and I, who stayed mostly sober. I didn’t want to flirt with him because I know Roomie has had a baby crush on him for a while, nothing serious, but she’s my best friend and I didn’t want to step on any toes. She told me to go for it, though. She says she’s known him too long.

Anyway, we all went out and he was flirting and we were dancing and one thing led to another and we went back to my apartment. Now, I was NOT planning on doing any such thing tonight. By this I mean my room was disgusting and my legs were not that recently shaved and our apartment smelled like cat.

I have not had a boy over since The Cat came to live with us. She immediately sensed that her side of the bed was threatened and went into panic mode and started pacing outside my bedroom door and yowling. She finally broke in, don’t ask me how, and began to pace around the bed. Seriously, top notch yelling. Then, mid-event, she jumps up on the bed and starts staring at this poor guy, who was like “Okay, I love cats, I just can’t deal with The Cat right now.” Over the next hour it becomes apparent that The Cat has two modes: Sleeping RIGHT next to this guy with her tail draped over his stomach and her butt all up in his business or pacing around the apartment yowling inconsolably. Over the next several hours while we try to get some sleep I am continually getting up to try to chase the cat away.

Thankfully, this guy was really nice about the whole thing.

It was a good night, though. He said I was pretty and he was an expert snuggler. Then this morning we slept in and he brought me breakfast in bed and it was just… nice. I knew it wouldn’t mean anything in the long term because he’s just visiting his sister from the other side of the country but it made me feel better. I still got SOME game, even if I am a crazy cat lady with a psychotic feline. I have to get The Cat under control.

And you know what’s weird? In one night he did a million little things that Sam never managed to do in seven months, and that wake up call was a nice added bonus.